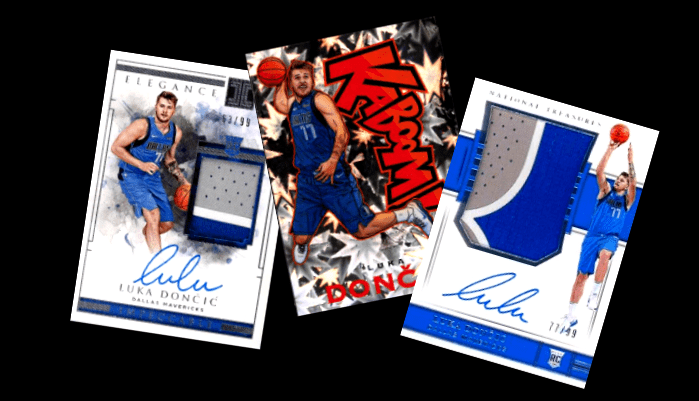 Since his NBA debut, Luka Doncic’s rookie cards have been more popular since his NBA debut than flapjacks at a lumberjack convention. They are, without a doubt one of the best long-term investments in the sports memorabilia hobby.

Luka took the league by storm in 2018, averaging a mind-blowing 21.2 points, 7.8 rebounds, and 6.0 assists per game. Those numbers were better than LeBron James’s rookie year stats and won him the 2018 Rookie of the Year award.

Luka rewarded the Mavs as he was unanimously selected to the NBA All-Rookie First Team.

Luka has carried the Mavericks throughout his short career in Dallas and led them to the NBA semifinals in 2021, losing to eventual champions Golden State Warriors.

Many believe Luka can and will win multiple NBA Championship Rings, but he may need more help. If he can win a ring or three, his rookie cards will explode and value.

Card makers ran wild, with Luka producing hundreds of rookie cards for collectors who eagerly gobbled them up.

Now is an ideal time to invest in Luka Doncic’s basketball cards before he wins those rings. Here are the top 10 Luka Doncic RCs to buy now and hold long-term.

The first card we want to look at is one with Luka in a black Mavericks jersey. He wears a black undershirt beneath his jersey and has blue leg warmers on. You can see Luka looking up-court in the image as he dribbles the ball in his left hand.

There are two things of note on the left side of the card. Up top, you can see a game-worn jersey patch. Here the patch is primarily white with black on the right.

Additionally, a Luka Doncic autograph is below it written in blue ink. Below that is Luka’s name and team. The background is blue in the top left and bottom right, whereas white is in the opposite corners of the card.

Here we have a unique card as Luka is not wearing his Mavericks uniform. Instead, this image is from when he played for Real Madrid in the Euro League.

His uniform is white and features several advertisements as is customary in European sports leagues. You’ll also notice Luka is wearing the number 7 instead of 77 as he does in the NBA.

Furthermore, you can see Luka making a pass with his right hand. Interestingly, European balls feature an equal amount of blue and black, making them different from American basketballs.

This Luka Doncic rookie card from Panini has a unique background. Several fans are looking on earnestly as the game unfolds. Luka in the foreground gives the feeling that the entire image could be from a game.

The image is a side-face view of Luka from the right side. Luka is in mid-air as he takes a jump shot with the ball in his hands.

He is wearing his white Mavericks uniform, and you can see the blue lettering of his number on the back. Additionally, Luka is wearing white leg warmers and white shoes.

The Select logo is in the top left and Luka’s name is written out in the bottom right. Both are in front of black backgrounds.

This Donruss Luka Doncic rookie card is unique because it has 3D imaging. It has a checkered background, but creative shading around the border makes it look like the image of Luka is a little further back.

In the image, Luka is wearing his blue uniform, and he is looking up-court. He is dribbling the ball in his left hand. An interesting quirk of the image is the checkered pattern overlaps with his legs. While this was likely unintentional, it is a cool distinction.

Below the image of Luka is a small blue border with his name and team written out. The right side of this border features the Optic logo. Finally, the Rated Rookie Logo is to the left of his head.

Kaboom cards always have unique designs, and this one is no different. It features a bright red Kaboom logo written vertically on the left side of the card.

The background features several bright colors, but it is mostly blue. The colors are split up into various star-like images.

You can see a cartoon drawing of Luka on the left side of the card as he gets ready to dunk the ball. He is wearing his blue Mavericks uniform and white shoes.

The bottom of the card also features “Luka” in black writing and “Doncic” in bright red. Finally, the Mavs logo is next to Luka’s left shoe.

You can see Luka in a unique uniform in this Panini Flawless card. Instead of wearing traditional colors, Luka is wearing a black Mavericks Jersey with blue lining.

He is also uncharacteristically wearing a black T-shirt under his jersey and blue leg warmers. He is dribbling the ball up-court in his left hand as he looks forward for offensive plays.

The left side of the card features a small jersey patch in the top left. This card’s patch is mostly white but has some black on the right side. Above it, you can see some numbering.

Below the patch is Luka’s autograph in blue ink. Below that is Luka’s name and team written out.

This Contenders Luka Doncic Rookie card features an image of Luka from the torso up on the right side of the card. Luka is looking up, getting ready to take what appears to be a free throw.

The ball is held firmly in both hands, and he is wearing his blue Mavericks uniform.

You can see a rookie ticket in the top right. It features the Mavericks logo and seat. Here it is for section 220, row 66, seat 18. The ticket is blue.

National Treasures cards always have elegant designs. In this Luka Doncic card, the picture of Luka is on the right side. He is wearing his Blue Mavericks uniform and white basketball shoes.

In the image, Luka is getting ready to take a jump shot. His left leg is lifted up, and you can see the ball is just about to leave the fingertips of his right hand.

The left side of the card has a large jersey patch. The patch varies in design from card to card, but here we can see a section of the word Dallas. Below it, you can see Luka’s autograph in blue ink.

Above the patch, it says National Treasures. Below it, you can see Luka’s name and team. Adjacent to that is the RC logo.

Only a few copies were printed because it comes with an autograph and game-worn jersey patch. The autograph is in black ink adjacent to Luka’s feet.

Above the autograph, you will see the jersey patch. The patch looks different in each iteration as it comes from different sections of the jersey. This patch features three blue stripes and two white stripes.

The left side of the card features an image of Luka in his white Mavericks uniform. He is taking a jump shop with both his feet off the ground. Additionally, you can see Luka is wearing white leg warmers.

Regarding Luka Doncic’s rookie cards, it is hard to ignore Prizm’s from Panini. You can see Luka in the center of the card as he prepares to take a jump shot.

Luka’s right leg is lifted high up in the image to get his shot over the defender. The ball rests in his dominant right hand and is balanced by his left. He is wearing his bright blue Mavericks uniform.

The card’s background is primarily black, with some grey and dark blue detailing around the edges. Additionally, there are two logos up top, the RC logo on the top left and the Prizm logo on the right.

Finally, Doncic’s name and team are written across the bottom of the card.

When looking at basketball rookie cards to purchase, it is best to get in on cards before they spike in value. Unfortunately, Luka Doncic rookie cards will not be available for cheap.

Luka has quickly established himself as a superstar and MVP candidate just three years into his young career. As a result, his cards have risen in value quickly with him.

However, that does not mean you should avoid his rookie cards. Several factors lead us to expect his cards to continue to rise in value.

Firstly, while Luka is already great, he is still very young and could get even better. Winning an MVP or championship would increase the value of his cards.

Additionally, since Luka is European, there is a massive market for his cards outside the United States. So, if you can get your hands on his rookie cards, you can sell them to more people.

So, it will take more money to purchase Luka Doncic rookie cards right now than other options. However, there is potential for his cards to rise in value more than any other young player in the NBA.

What is the most valuable Luka Doncic rookie card?

The most valuable is the 2018 Panini National Treasures Rookie Logoman Auto which sold for over 4 million dollars on 3/7/2021 via Goldin Auctions.

The best should be based on return on investment (ROI). Based on ROI the top Luka RC is the base 2018 Panini Prizm #280.

What is the rarest Luka Doncic card?

The rarest Luka Doncic cards are labeled 1/1. Many Luka cards are a 1 of 1. Some examples are the 2020-21 Panini Mosaic Luka Doncic Black Prizm True 1/1 and the 2021-22 National Treasures Luka Doncic Penmanship Auto Platinum 1/1.